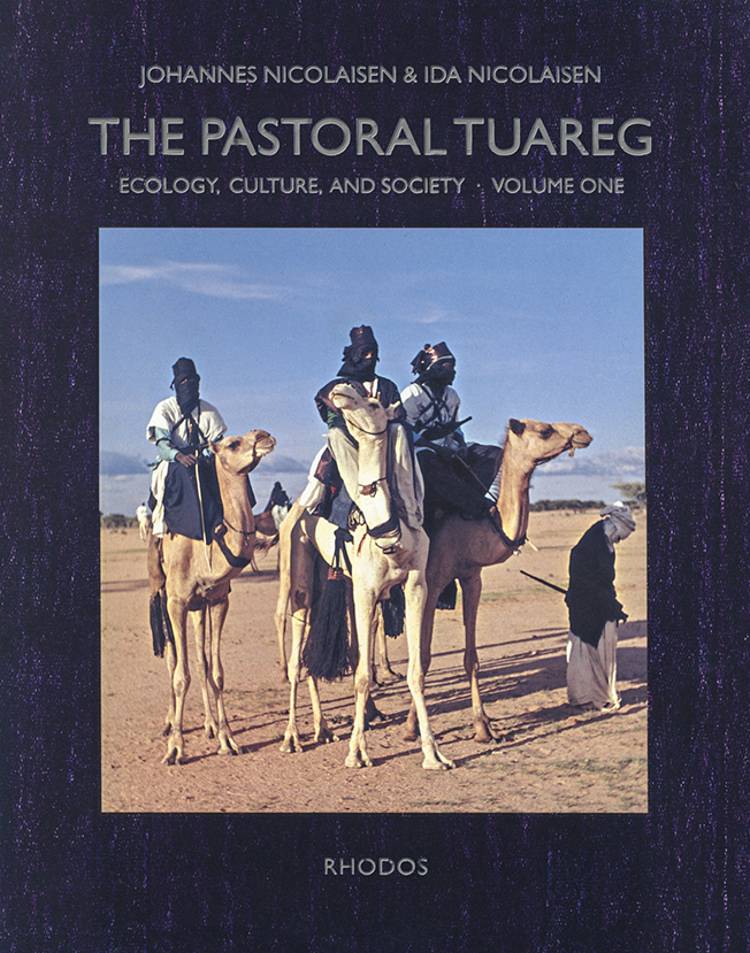 Endnu ingen
anmeldelser
Popularly known as the ‘blue people’, the pastoral Tuareg have for centuries carved a living in the heart of the Sahara and on the vast plains of the Sahel. Unwilling to accept the political authority of others they first fought the French and now claim their right to self-determination in Niger, Mali and Algeria. Few have known these nomads better than the anthropologist Johannes Nicolaisen, who in part with his wife and fellow anthropologist, Ida Nicolaisen, shared his life with them in their tiny camps and followed them on camel’s back on long caravan journeys for more than three years between 1951 and 1972. Here is a unique contribution to our understanding of the culture and society of the pastoral Tuareg. The first volume offers a sensitive analysis of Tuareg everyday life and the intricacies of their pastoralism. It explores how various Tuareg tribes cope with the environment, their knowledge and practices of stock-breeding, from the use of fodder plants and veterinary methods to magic. It demonstrates how the Tuareg organize their work and camps, and describes other activities pertinent to their substance: hunting, collecting, agriculture and caravan trading. Subsequent chapters analyse Tuareg food habits, crafts, and dress codes. On the basis of this copious material the book takes a critical stand on ethnological theories on the cultural history of North Africa. The last chapter offers an extensive expose on the rich variation in tents and other dwellings. The second volume focuses on the fascinating complexity of Tuareg social life: the origin and workings of the traditional political systems of various Tuareg tribes, the delicate relations between noble and vassal Tuareg, and the economic and social importance of slavery. It devotes itself to Tuareg perceptions of kinship and their intricate rules of avoidance and joking behavior, including their customs of veiling, traditions of matrilineal and patrilineal succession and inheritance practices, as well as analyses of women’s roles, Tuareg marriage preferences, sexual behaviour and wedding ceremonies. The concluding chapter discusses the emergence and specific characteristics of modern Tuareg culture and pastoralism in the light of available historical sources and current theories on the early domestication of livestock and ancient patterns of subsistence. On the basis of this wealth of data the authors significantly broaden our understanding of the ongoing transformation of Tuareg social life and the history of pastoral nomadism. Contents: The Tuareg – Environment – Stock-breeding – Rationality, customs, and beliefs in stock-breeding – Social aspects of stock-breeding – Hunting – Collecting – Agriculture – Caravan trading – Food preparation – Crafts – Dress – Tuareg culture, history, and African culture complexes – Tuareg dwelling types – Political systems of pastoral Tuareg – Tuareg slavery – Kin and kinship – Kinship behavior – Succession and inheritance – Women’s lives: Work, rights, and influence – Marriage: Preferences, deliberations, and ceremonies – Diffusion and function in social organization – Conclusion - Appendix I: Tuareg time reckoning – Appendix II: Fodder plants of Ahaggar – Résumé en Français – Bibliography – General index – List of authorities – Glossary of Tuareg words – General vocabulary – Social and political groups – Geographical names – Personal names. Published in 1997 in the series The Carlsberg Foundation's Nomad Research Project. 2 volumes, hardcover with dust jacket. 878 pages. 400 illustrations – 200 in colour – and 3 maps. Johannes Nicolaisen (1921-1980) was professor of anthropology at the University of Copenhagen. He received his M.Sc. in 1950 and D.Phil. in 1964 in Copenhagen having spent two years at University College London. Johannes Nicolaisen did field research among a range of pastoral peoples: the Same of Northern Scandinavia. Arab Bedouin in Algeria, and in particular the Tuareg of the Sahara and Sahel. He later studied the nomadic Haddad of Tchad, the Negritos of the Philippines, and the Penan of Borneo. His works include Ecology and Culture of the Pastoral Tuareg (1963), two books on the history and methods of anthropology, and numerous articles on the Tuareg and the Penan. Ida Nicolaisen (b. 1940) is associate professor at the University of Copenhagen. She did fieldwork first among the Tuareg and wrote her M.A. thesis on Tuareg slavery. She studied the Haddad of Tchad with Johannes Nicolaisen, before she turned her interest toward the Punan Bah of Central Borneo. She has done extensive studies of this society, returning repeatedly to the field over the past twenty-five years. Ida Nicolaisen has written on a broad range of anthropological issues, in particular on the culture and socio-economic transformation of the Punan Bah. She has worked as a consultant on environmental and social development projects in Mauretania, Senegal, Niger, Somalia, and Ethiopia for the Danish Development Agency and WWF.
expand_more